When you book with an account, you will be able to track your payment status, track the confirmation and you can also rate the tour after you finished the tour.
Sign Up

Or Continue As Guest

When you book with an account, you will be able to track your payment status, track the confirmation and you can also rate the tour after you finished the tour.
Sign Up
171 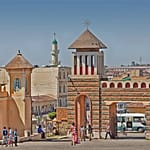 Do not hesitage to give us a call. We are an expert team and we are happy to talk to you.

Attractions and Things to Do in Keren, Eritrea
January 28, 2023Yonatan Welday

The beauty of Dahlak Islands
May 1, 2021Yonatan Welday
DetailPhotosItineraryMapReviews

In this ultimate cycling adventure tour of Eritrea, we will take a bike ride in Asmara, which is home to one of the most impressive collections of early 20th-century architectural styles – and has UNESCO given its World Heritage Site status. We will also visit Port city Massawa The City of Islands and the ‘Pearl of Red Sea’ town have served as one of the region’s most important ports for centuries.

After your arrival upon your arrival at Asmara International Airport, you will be transported directly to the hotel. Enjoy your stay at your hotel before attending a pre-activity session with your cycling guide(s) to discuss the cycling program.

After breakfast, our bike tour begins in Asmara and the surrounding areas. Asmara city is called “Little Rome,” and the architectural wonders described in several of its buildings, such as the Roman Catholic Cathedral, the Basilica of the Orthodox Church of Saint Mary, Al Khulafa al Rashedin, Mercato [vegetables, spices], Medeber (recycling depot), National Museum, Palazzo Fiat Tagliero, etc.

After having a wonderful time in Asmara, The journey to Massawa commences. Take the significant Asmara – Massawa highway that runs through The town of Ghindae and awe-inspiring, stunning snaking bends, breathtaking views of cool and warm air, and occasionally a haze of mist covering the horizon.

Today, you will spend the morning cycling through the charming landscape in Massawa and along the coast of the Red Sea as far as possible.

Today is a rest day, and you will have the day free to wander and explore this beautiful part of Massawa.
Start in the morning hours boat trip to Green Island, the most accessible island. After having enjoyed the last swim in this paradise, return to Massawa.

Today you will have a much more challenging task on your hands as you will switch it up a gear and tackle the hills of Asmara – Massawa highway. Cycle back uphill while enjoying the magnificent scenery and lush vegetation to Asmara, as time allows, with stops on the way at interesting sites and encounters with the local people.

After breakfast, you’ll be cycling via the major Asmara – Dekemhare highway between large mountains to Dekemhare. Dekemhare is a rural town 32 kilometers south of Asmara, and it was the favorite settlement of the Italians because of its mild climate and fertile soil. Following a memorable stay in Dekemhare, return to Asmara. in the late afternoon

After breakfast, we’ll be cycling via the major Asmara – Mendefera highway through the town of Debarwa. Mendefera is the capital city of the Debub Region of Eritrea. The town’s name derives from the high hill in the city’s center and is a source of pride to Eritreans. It means ‘no one dared’ and is a reminder of the local anti-colonial movement.

Mendefera was established early in the fifth century BCE, and it evolved into an important city in the Aksumite civilization. Numerous buildings have been excavated since 1959, with both crosses and local and Roman coins found. Many areas, including tombs, have yet to be explored. Following a memorable stay in Dekemhare, return to Asmara in the late afternoon.

Today is a rest day. You will have the day free to wander and explore this beautiful city of Asmara. Transfer to the airport for a return flight back home. Take a host of memories and experiences of Eritrea that will be second to none.